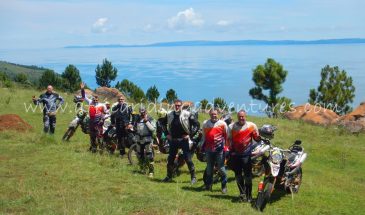 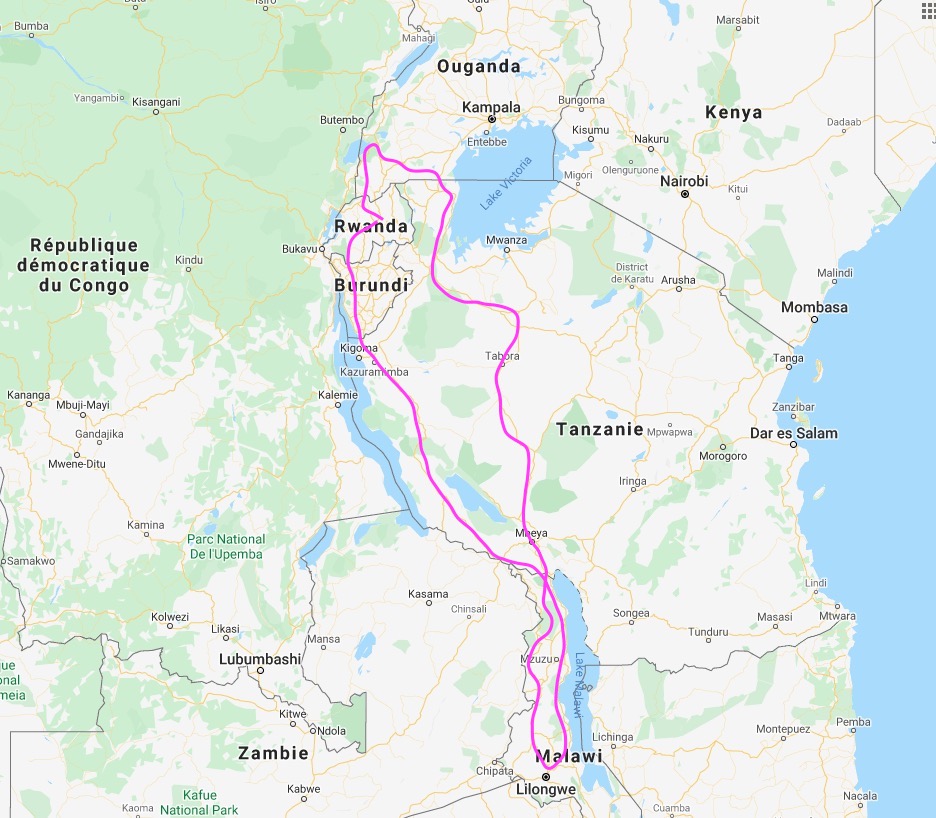 The way to Burundi is very beautiful and fun to ride on nice curvy roads. We will pass through some of the villages of Rwanda, which are nice and clean. There will be a border crossing to do, which will be quite quick. Once in Bujumbura we will visit the night life of the Economic Capital city of Burundi and ride on the mountains around the town to get great points of views on lake Tanganyika. The way to Tanzania will be so spectacular that it will probably be impressed on you for a long time. We will be riding next to Lake Tanganyika all the way till Kigoma, which is also located by the shore of the longest fresh water lake of the world. We will cross another border into Tanzania. (550 km paved and some off-road parts)

We’ll ride on some of the many Tanzanian plains, passing also through some small mountain range. It will take us through the Katavi National Park where we will surely encounter some wild animal on the way. The ride will be fun on some different kind of off-road passing also through wet lands. We continue the ride toward Tunduma which is a town bordering with Zambia. Though we will cross into it, we still have to pass through there to go to Malawi. (1020 km off-road and paved roads)

Explore the shore of lake Malawi

After some days of continuous riding is good to have a rest day, so let’s enjoy the evening by the lake and explore the next day the surroundings of Livingstonia, offering amazing views on lake Malawi. We will then have a long ride to Nkhotakota, which was originally a group of villages in the 19th century which later served as a market for Swahili-Arabian slave traders. David Livingstone convinced Chief Jumbe to stop trading slaves under a tree in Nkhotakota in the 19th century, which is currently in existence under a mission. Later Malawi president Hastings Banda gave speeches under another tree in Nkhotakota during the 1960s, this one ironically known as the Livingstone Tree. This town was hit by the 2001 floods, and was the worst hit area of Malawi's Central region. Today, Nkhotakota is the largest traditional African town in Malawi and bears a strong Swahili-Arab influence. We will finally reach the Capital city of Malawi, which has quite few places to visit like the old town for instance. (615 km off-road and paved roads)

Riding on the central plateau of Malawi back to Tanzania

The first part of the ride will be mostly on paved road. You will see a different view of Malawi as the lake will be relatively far, crossing highland plateau covered by forests and natural massive rock formations. We will stop over at the Luwawa Forest, a peaceful and relaxing place and continue our ride on beautiful off-road through the Nyika plateau, bordering Zambia and explore the Nyika National Park, the largest of Malawi, with its stunningly beautiful scenery leaving most of its visitors lost for words. We will then ride back to the border of Tanzania, leaving the Malawi highlands behind us. As soon as crossed back into Tanzania, we will start a scenic ride all the way to Mbeya. The stops and border procedures will take a good amount of our time. We will enjoy a beer in this bustling large town in the late afternoon. (850 km off-road and paved roads)

Riding through the central Tanzanian plateau

A nice ride back in the no men’s land. From Mbeya, we will ride in highlands along a ridge offering great sceneries. We will start to get much warmer weather, crossing the long Tanzanian plains encountering few inhabitants. We will pass by Tabora, a town with a long colonial history, then ride further north, passing in between the Biharamulo game reserve and the Burigi game reserve and then get close to the Lake Victoria (the biggest lake in Africa, which is part of 3 countries) and riding next to it for many km. Our destination will be by the shore of this huge lake!! (1200 km off-road and paved roads)

Our first destination will be the Queen Elizabeth National Park. We will cross the border to enter Uganda, an ride on a mix of paved roads and great off-roads, ending our ride on curvy roads through green tea plantations. We will explore the Queen Elizabeth National Park on our motorcycle, encountering some of the Big Five and stop for a photo on the Equator. This part of Uganda will offer us the most fun rides, riding through Queen Elizabeth N.P. and Bwindi Impenetrable Forest is simply fantastic, with the nice off-road, the wild life that you encounter on the way and the views of the many lakes surrounding the Parks. We will stop for a day to track the Mountain Gorillas around Kisoro. All our previous clients had a stunning experience, so true that none of them regretted it!! This area of the Volcanos between Uganda, DRC and Rwanda is the only place in the world where you can still admire the Mountain Gorilla!! An experience not to miss!! Our last riding day will be mostly on nice paved roads with nice curvy ones in Rwanda. In the evening we celebrate the tour in a nice restaurant!! (800 km off-road and paved roads)

To get the cost of the various packages, Please contact us!

What is included in All-Inclusive package:

What is included in the Bike and Support Vehicle package:

What is included in the Bike Only package:

What is Never included:

Skill Level Description Our tours are skill levelled from 1 to 5. We sometimes rate them with two difficulty levels e.g. 2/3 as some tours require different riding skills in different parts of the itinerary. In these cases the first number represents the main difficulty level present and the latter, only stretches of the itinerary. Please don’t forget to fill our skill level description form when inquiring about a tour so we can better match you with the tour of your dreams.